A BRIEF HISTORY OF OUR SHUL

I grew up in Sea Point and did not know the small shul at 23 Buitenkant Stret which later moved to Virginia Avenue Vredehoek.  The leaders of this congregation were Messrs Kellner, Zeldin and Slivkin and they decided in their wisdom that their future lay in Sea Point.  In the mid-fifties they purchased the Dutch Reformed Church part of a property known as Verandah Lodge and proceeded to rebuild.

At the same time my sister, Sylvia Lidsky and her husband purchased the rectory from Dominee Beukes.  While having Sunday tea with the family, in stormed Israel Kellner, a man of intense vitality who never knew the meaning of the word “no”.  He asked us to join him over the road to daven mincha.  We stood among the bricks and cement, and had the first service of the Hebrew Congregation Chabad.  I was invited by Mr Kellner to become a member and soon became the congregation’s secretary/treasurer.

Times were difficult as most of the shul’s supporters lived in town, and although we had a large membership of Chassidic family background, they did not attend services.

Rabbi Gourarie a colourful personality of Israel was engaged as spiritual leader in 1957 and he conducted his sermons in Yiddish, which was understood by most congregants.  Dissension led to squabbles and disunity in the shul as most Sea Point could not accept Chasidism.  As a result membership dropped and financial problems arose, forcing the shul to take out a first and second bond with the S.A. Mutual.

Mr Kellner approached my father, Dick Goldman, to help the shul over its financial and managerial problems.  My father took up the challenge by retiring from the family business which enabled him to concentrate fully on the shul’s affairs.  Chassidism was not a success in Sea Point, resulting in us changing to an Ashkenazi service.  Thus the Arthur’s Road Heberw Congregation was born.

At this stage Max Weinkove joined the shul and became firm friends with my father, and together started turning things around.  Unfortunately Max passed away suddenly which was a sad loss.  A new member, Abe Silverston helped out in running the services.  My father believed that only by reducing expenditure would the shul survive.  He believed that nobody would refuse to help a shul if asked to.  The best example of this was the donation of two silver breastplates which adorn our Torahs today.  They were by Alexander Sagov after his flotation on the JSE.  To the best of my knowledge, he never ever visited the shul.

The membership increased and we employed an Israeli teacher, Mr Rothchild, to conduct the services.  Our attendance on Friday night numbered eighty.

My father believed that the Lord would always send us a special person to help us in our difficult times.  Many of them including our current executives, came from unusual backgrounds.  The first special person was Meyer Lewin, who was the forerunner of many more.  The shul was now prosperous and engaged Rabbi Mendel Popack as its spiritual leader.  Although we were always a small congregation we prided ourselves that we keep Yiddishkeit alive and introduced many firsts to Cape Town Jewry.  I list just a few below.

My son, Saul, became the first Barmitzvah boy to be showered with sweets, a custom which is today in general use.  Although I was a regular shul-goer since my youth, I witnessed for the first time duchening by the Cohanim, which is now in general use.  The Yahrzeit Memorial Board was another first.  My father and I visited Rabbi Feldman at Chasidei Gur and decided to order one immediately for our shul.  This was taken up by most congregations.  Rabbi Popack and David Noll through their hard work and dedication provided Cape Town Jewry with a modern Mikvah.

In this short article it is impossible to cover over forty years of history, but I must conclude by mentioning two outstanding members, Nathan Malamed and Julius Kaufman, both of whom I had the privilege to befriend. 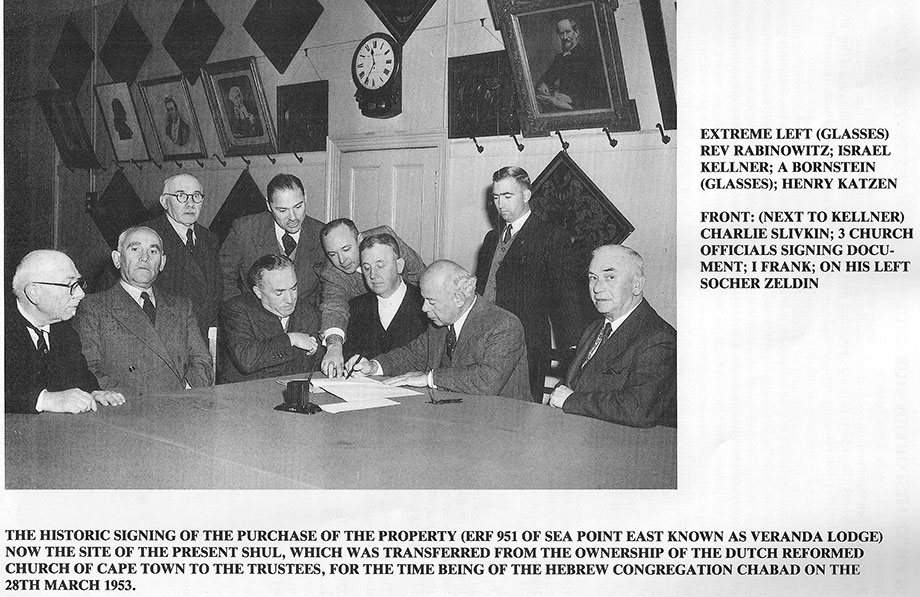 We use cookies on our website to give you the most relevant experience by remembering your preferences and repeat visits. By clicking “Accept All”, you consent to the use of ALL the cookies. However, you may visit "Cookie Settings" to provide a controlled consent.
Cookie SettingsAccept All
Manage consent

This website uses cookies to improve your experience while you navigate through the website. Out of these, the cookies that are categorized as necessary are stored on your browser as they are essential for the working of basic functionalities of the website. We also use third-party cookies that help us analyze and understand how you use this website. These cookies will be stored in your browser only with your consent. You also have the option to opt-out of these cookies. But opting out of some of these cookies may affect your browsing experience.
Necessary Always Enabled
Necessary cookies are absolutely essential for the website to function properly. These cookies ensure basic functionalities and security features of the website, anonymously.
Functional
Functional cookies help to perform certain functionalities like sharing the content of the website on social media platforms, collect feedbacks, and other third-party features.
Performance
Performance cookies are used to understand and analyze the key performance indexes of the website which helps in delivering a better user experience for the visitors.
Analytics
Analytical cookies are used to understand how visitors interact with the website. These cookies help provide information on metrics the number of visitors, bounce rate, traffic source, etc.
Advertisement
Advertisement cookies are used to provide visitors with relevant ads and marketing campaigns. These cookies track visitors across websites and collect information to provide customized ads.
Others
Other uncategorized cookies are those that are being analyzed and have not been classified into a category as yet.
SAVE & ACCEPT
COMPETITION RULES: